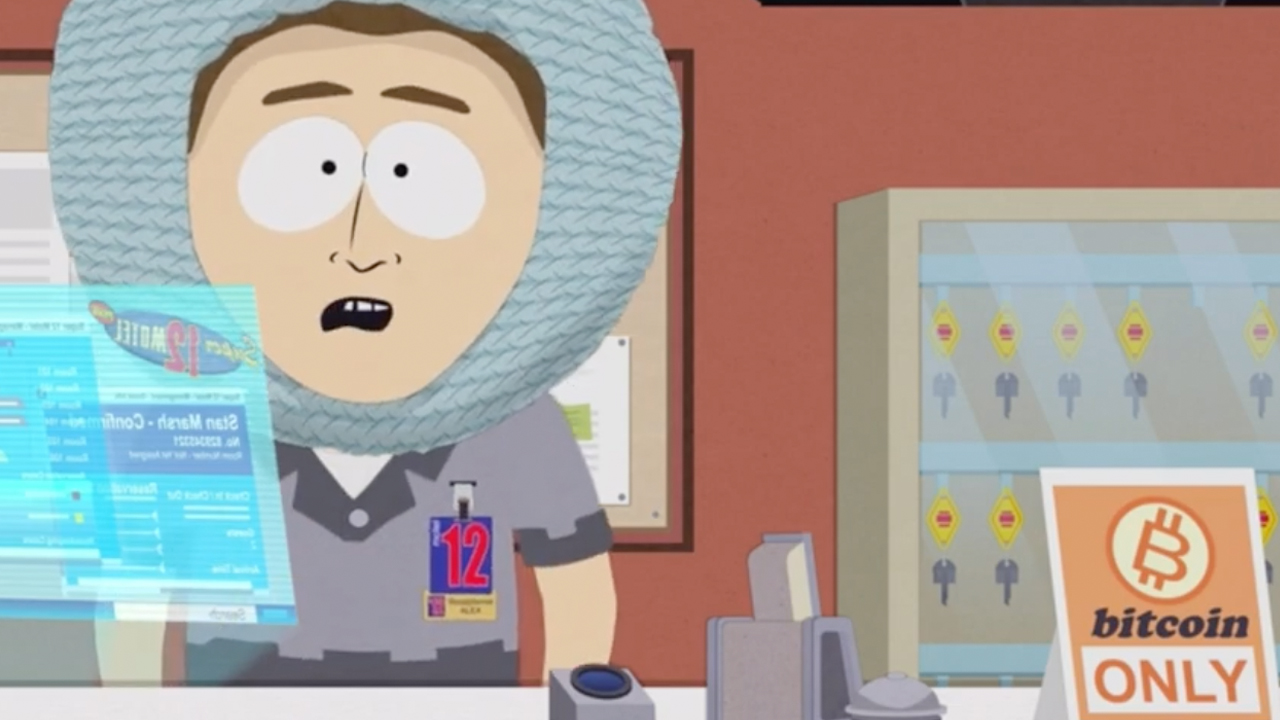 South Park’s recent episode called the “Post COVID” special mocks a future where the only currency accepted is bitcoin and other cryptocurrencies. The hour-long animated sitcom picks up years into the future where the main characters are now all grown up, except Kenny McCormick who is dead.

The popular television sitcom South Park featured on Comedy Central is extremely well known in today’s pop culture ever since Trey Parker and Matt Stone created the show in 1997. Over the last 24 years, the animated sitcom has aired more than 300 episodes and in more recent times, Stan Marsh, Kyle Broflovski, Eric Cartman, and Kenny McCormick have been dealing with an interesting world. In the latest episode called “Post COVID,” Stan, who is now an online whiskey consultant, is told by Kyle that Kenny had passed away.

When Stan decides to go to Kenny’s funeral services, he spends his stay at the Super 12 Motel Plus and is greeted by a clerk who explains Stan booked one of the motel’s Mach 10 Super Plus rooms. “Now of course we only take bitcoin and other cryptocurrencies,” the motel clerk
Login for hidden links. Log in or register now.
. “Because… ya know — It’s the future — we’ve all decided centralized banking is rigged so we trust more in fly-by-night Ponzi schemes,” the Super 12 Motel Plus clerk added. “Yeah, I know,” Stan sighs and hands the clerk a card bearing the bitcoin logo on it with a QR code.

Bitcoin Has Been Featured on Television Since 2012​

Bitcoin has been featured in a number of television series’ episodes during the last decade and in various settings. This year bitcoin was mentioned on Marvel Cinematic Universe’s action drama television show “The Falcon and the Winter Soldier.” Bitcoin has been featured on the American comedy-drama series “Shameless” on multiple occasions. The leading crypto asset was also mentioned on two occasions on the American television game show Jeopardy.

Before South Park, bitcoin appeared on the shows “Parks and Recreation,” “Mr. Robot,” “Morgan Spurlock Inside Man,” “Navy CIS LA,” “Almost Human,” “House of Cards,” and “The Big Bang Theory.” Bitcoin’s first mention on television was on an episode of “The Good Wife” in 2012 and Krusty the Clown from “The Simpsons” mentioned the cryptocurrency the following year.

What do you think about South Park mocking a bitcoin-only world in the latest episode? Let us know what you think about this subject in the comments section below.
You must log in or register to reply here.